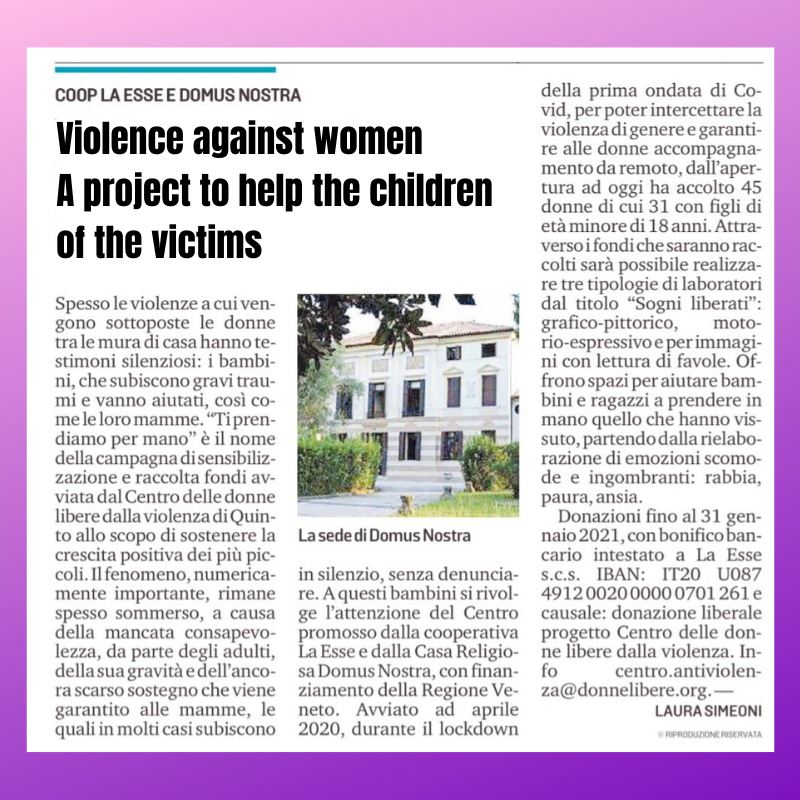 Together against violence
domestic and assisted

Often the violence to which women are subjected within the walls of the house have silent witnesses: children, who suffer severe trauma and need help, as do their mothers. “We take you by the hand” is the name of the awareness-raising and fundraising campaign launched by the Centre for Women Free from Violence in Quinto in order to support the positive growth of children. The phenomenon, which is numerically important, is often overwhelming, due to the adults’ lack of awareness of its seriousness and the lack of support that is still given to mothers, who in many cases suffer in silence, without denouncing it. These children are the focus of the Centre promoted by the La Esse cooperative and the Religious House Domus Nostra, with funding from the Veneto Region.

Launched in April 2020, during the lockdown of the first wave of Covid, in order to be able to intercept gender-based violence and guarantee women remote accompaniment, since its opening until today it has welcomed 45 women, 31 of whom with children under the age of 18. Through the funds that will be raised, it will be possible to carry out three types of workshops entitled “Free Dreams”: graphic-pictorial, motor-expressive and fairytale reading. They offer spaces to help children and young people to take in hand what they have experienced, starting from the reworking of uncomfortable and cumbersome emotions: anger, fear, anxiety.
Donations until 31st January 2021, by bank transfer made out to La Esse s.c.s.
IBAN: IT20 U087 4912 0020 0000 0701 261 and causal: liberal donation project Centre for women free from violence.
Info: centro.antiviolenza@donnelibere.org