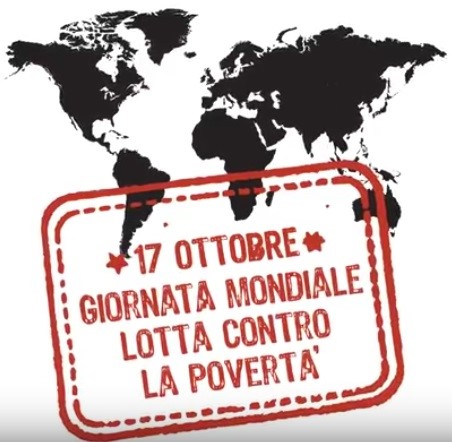 For us, this is a day of remembrance and testimony. Remembrance brings us back to the underlying event: on 17 October 1987 in Paris, a hundred thousand defenders of human rights responded to the call of the French Father Joseph Wresinski – founder of the International ATD Fourth World Movement – to honour the victims of hunger, violence and ignorance, to announce their rejection of misery and to call on humanity to unite in order to ensure that human rights are respected.

International Day for the Eradication of Poverty - 2020

They were citizens from all walks of life, all backgrounds, all creeds. Some represented high public authorities, international, national or local. Others were individuals and families who themselves lived in great poverty and opposed it every day.

From this date, on 17 October each year, the poorest and all those who reject poverty and social exclusion come together throughout the world to show their solidarity and their commitment to ensure that the dignity and freedom of all are respected.

Commemorative plaque unveiled on 17 October 1987, at the Trocadero on the Liberties and Human Rights square.
http://maipiumiseria.org

"WHERE PEOPLE ARE CONDEMNED TO LIVE IN MISERY
HUMAN RIGHTS ARE VIOLATED
UNITING TO ENFORCE THEM IS A SACRED DUTY".
(Father Joseph Wresinski)

This is how the “World Day for the Eradication of Poverty” was historically born, later sanctioned in 1992 by the UN.

ABOUT US: Who is the founder of the ATD Fourth World Movement?

For Father Wresinski, who died in February 1988, the event of 17 October 1987 was the culmination of an existential and spiritual journey marked by pain and misery, experienced at first hand or shared with the poorest and most humiliated:

-of a Polish father with a German passport and a Spanish mother, was born in 1917 in Angers, during the First World War, in an internment centre for foreigners suspected of collaborating with the enemy. His two-year-old sister died of hardship there.

– At the end of the war, his family found refuge in an old abandoned forge in Angers. From an early age, Joseph was called upon to support the family by looking after a goat, then served Mass at the Good Shepherd Sisters, in exchange for a cup of milk and two pennies. “It was precisely this money that made me decide” he would later say.

-in 1956, his bishop, who had been parish priest in Angers, in the parish of the Wresinski family, suggested that he go to an emergency “cité” that looked like a slum in the Paris region created two years earlier by Abbé Pierre. Here he founded the ATD Fourth World Movement.

"Poverty is the most total and obvious violation of human rights, because it affects man not only in a particular right but in the totality of his rights. For those who remain illiterate, deprived of education but also of information, means of communication and community and collective organisation, the political freedom of the modern world remains a dead letter. Not only is the political freedom of the starving man, crushed by great misery, a dead letter, but his being is reduced to a state of dependence on the assistance of others”.
(Father Joseph Wresinski, Introduction to the 1984 Moral Report of the ATD Fourth World International Movement)

Read: Introduction to the 1984 Moral Report of the International ATD Fourth World Movement