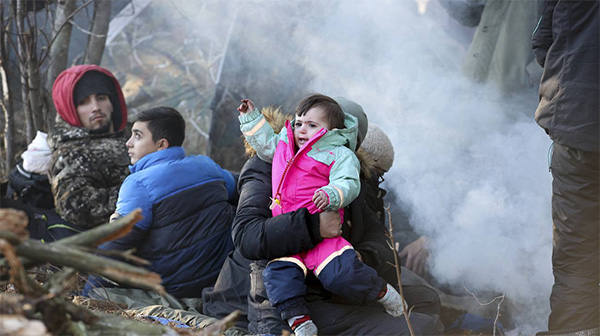 Nobody in Europe wants them. Polish authorities have warned that the migrants’ attempt to enter Poland could result in armed violence.
(Source: rainews.it)

Most of them are Kurdish families, but they also come from Syria, Afghanistan, Ghana and Cameroon. They remain as if crushed between deceptions and selfishness that, we know, morally concern us all. It is impossible to advance and impossible to retreat: “the images of the crowd being pushed along the barrier released in these hours by the Warsaw authorities confirm how human beings are used as an “unconventional weapon””. (Source: avvenire.it)

They have been tricked by Belarus, which has orchestrated a humanitarian trap in retaliation against European sanctions: its embassies have issued tourist visas including an artificially created route that is turning out to be a trip to hell and not to the promised Germany. The complete ‘holiday’ package in Belarus, which conceals the commitment to drive to Poland, Latvia and Lithuania, is negotiated with traffickers and compliant tour operators and costs between 10,000 and 15,000 euros (Source: Repubblica 10/11/2021).

Poland rejects them and has deployed “about 17,000 border guards and soldiers to make sure that no refugee manages to crawl under the fence”. (Source: Repubblica 9/11/2021)

The European Union, incapable of compassion, civilisation and strategic thinking on migration, “freezes” them in the Fortress Europe model.

ALL THAT REMAINS IS TO INVOKE THE GRACE OF SHAME

THE SHAME OF EUROPE