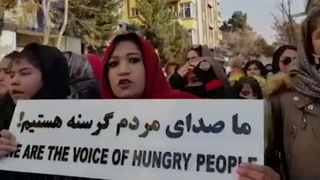 They return to the streets to demand justice, freedom and work: ‘We are the voice of the hungry people’. The Kabul women’s protest was triggered just a few days after the Taliban issued a decree by the Ministry of Virtue and Prevention of Vice, according to which women cannot travel more than 75 kilometres from their place of residence unless they are in the company of a close male relative. The decree also recommends that drivers should not accept women in their vehicles unless they are wearing the ‘Islamic veil’.

In the capital, dozens of people defied the Taliban, demonstrating against the discriminatory measures indicating a progressive return to the first fundamentalist regime and against the indiscriminate killings of former Afghan soldiers.

Criticism of the Taliban’s decree even came from the government of Pakistan, the main ally of the Koranic students, who returned to power in Afghanistan last August.

“This kind of retrograde thinking is dangerous“, said the Pakistani Minister of Information, denouncing an “extremism” that could “spread” to Pakistan. (Source:www.avvenire.it)

Women’s hopes evaporate in Afghanistan: abuse forced marriages and suppression of human rights
Women wearing red scarves arrive in Italy, as chaos erupts in Kabul
In the Afghan chaos, our responsibility to welcome those fleeing for their lives wins out
The courage of Afghan women challenges the Taliban on human rights trampled by Sharia law