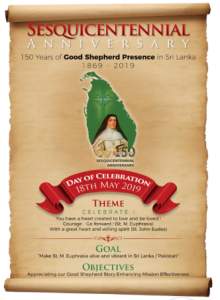 Only three years have passed since the joyful celebration of the 150th anniversary of the presence of the Good Shepherd Sisters “in Sri Lanka, formerly known as Ceylon,” wrote Sr Ellen Kelly, the then Congregation Leader on the occasion of the celebrations.

Recounting the history of the last foundation desired by St Mary Euphrasia, Sr Ellen expressed her gratitude as follows:

“God’s providence for the Congregation is evident not only in past history, but also today, when sisters and mission partners respond and reach out to those on the margins […] The Sri Lankan Province developed a ‘missionary’ culture in the early years and sent sisters to almost every country in Asia and today they serve in many other countries in our global Congregation.” …from which, for some years now, our Italy-Malta Unit has also benefited thanks to the contribution of Sr. Sumanthri, currently Local Responsible of the apostolic community of Quinto di Treviso.

During that anniversary, in 2019, the country was still living in a climate of confidence: this is attested by the success in the presidential elections of the same year and parliamentary elections, August 2020, of Gotabaya Rajapak, a member of a family in government since 2005, almost uninterruptedly, despite ‘human rights attacks against Tamil separatists, but also against Sinhalese opponents, the affiliation of the press and the judiciary, the growing importance of the armed forces in public life, favouritism and corruption of the ruling clan.” (Source: Le monde diplomatique, July 2022).

SINCE SPRING 2022, THE COUNTRY HAS BEEN IN CHAOS:
BASIC GOODS AND RESOURCES ARE IN SHORT SUPPLY
THE POPULATION IS EXHAUSTED

Long gone are the days when Sri Lanka became the most advanced country in South East Asia in terms of quality of life.

Thanks to Sr Sumanthri, who has been back in her country for a month, we have gathered the testimony of Sr Maryanne Perera, the provincial leader, who, 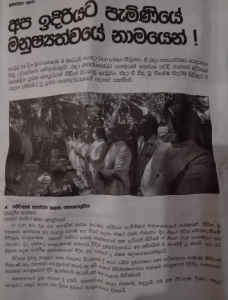 together with her sisters and religious from numerous congregations, immediately shielded the people demonstrating to protect them from possible police violence, as she pointed out in the interview in the local press:

“On 24 April, the capital Colombo was blocked by the police because the population had organised a protest. We sisters sensed that people were suffering and in danger, and at that point, we acted with the sole aim of protecting their lives. We left everything behind to rush to their aid as our mission dictates, especially for women and children.

Our only hope is to get out of the very serious economic crisis that has engulfed our country. Risking our lives, we had neither political nor religious propaganda objectives. We are women consecrated to the service of people: their pain is our pain, their tears are ours. When tears are replaced by joy, that will also be the day of our victory!”.