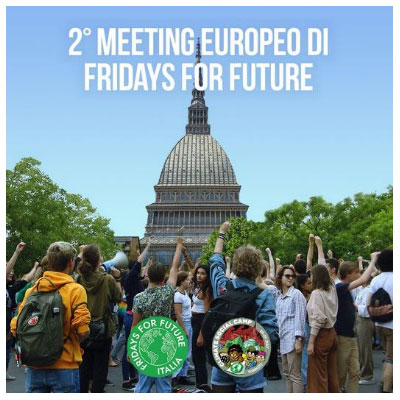 Average age? Twenty years old, committed and angry. This is how the hundreds and hundreds of young people from all over the world, disappointed by politicians and adults, are described, gathered for two parallel events from 25 to 29 July in Turin: the Climate social camp and the European meeting of Fridays for future, an informal congress of climate activism. But there are many more, more than a thousand, who arrived in tents from all over the world at the Climate social camp, in the Parco della Colletta, to share both concerns and solutions for ‘a problem that concerns us all and which goes beyond the climate: it concerns society, energy resources, justice. And also war: everything is connected, everything is interconnected’. (Source: Repubblica)

It was 2019 when the movement met in Lausanne with the intention of meeting again the following year in Turin. Covid-19 did not allow it, but now the time has come. An opportunity to also launch the green generation’s global advocacy plan ‘Climate, Social, Justice’ by discussing in particular on:

In Turin there will also be an opportunity to discuss and organise the Global Climate Strike on 23 September 2022, two days before the Italian political elections. ‘We are a non-partisan movement,’ they point out, but ‘we will all look at programmes and lists to find those that will put the environment on the agenda,’ says Giulia. But even without looking at the elections, they are all convinced of one thing: ‘What we are doing is already politics because the climate impacts on communities,’ says Pietro, a 28-year-old Tuscan professor. ‘Not all people my age have understood this, but the younger ones do.

In the wake of the Positions, we support the commitment and hopes of young people to repair the Planet and make peace with the Earth and each other.