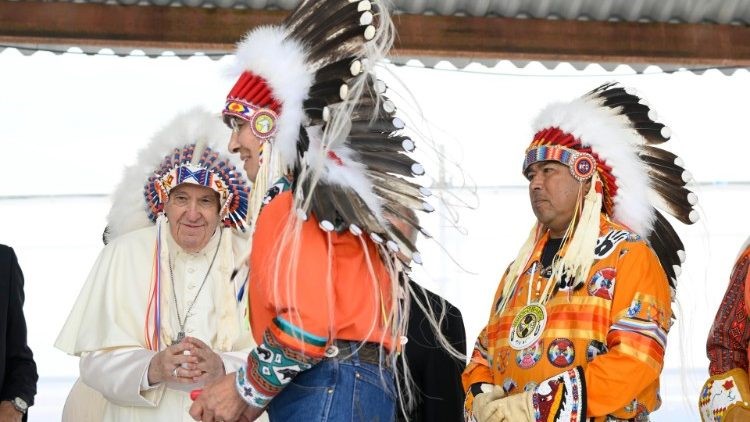 Indigenous peoples are unique in their inheritance and practice of cultures and ways of relating to people and environments. They have maintained social, cultural, relational, economic and political characteristics that are distinct from those of the dominant societies in which they live and are guardians of biodiversity.

This year the 2007 United Nations Declaration on the Rights of Indigenous Peoples has two exceptional champions and two special circumstances: Pope Francis with his ‘penitential journey’ to Canada (Pope Francis on a journey of healing and reconciliation with the indigenous peoples of Canada) and the young people of Fridays for Future who arrived in Turin last week from all over the world to demand climate justice (Young champions of the planet for social and climate justice, disillusioned by adults, meet in Turin).

This year – in both cases – it was not ‘only’ about supporting the rights of peoples: Pope Francis, in Canada made a great gesture of humility by asking for forgiveness for the physical and cultural genocide/ethnocide suffered by the indigenous peoples of North America at the hands of European colonisers since the 16th century, even with the support of Christian clerics.

Of the many dark pages of history, few have enjoyed such blatant falsification as the Native American genocide, where the crimes committed were not only removed but actually reversed in meaning and glorified.

The young people of Fridays for Future in Turin also proclaimed the turning point: from protesting the wounds of the Earth, to protecting those who care for the Earth and defend biodiversity:

«9 August is World Indigenous Peoples’ Day and we honour them, not just one day, but always, as the first and last line of defence of our environment. “With every tree that is cut down, a part of us dies, because territory dies, and without territory there is no air, there is no air for those who populate the world. People no longer breathe’. Despite making up only 5% of the world’s population, indigenous peoples protect 82% of the world’s biodiversity. “One can only be human if one knows how to be also plant, to be also seed, to be also fruit. The anti-humanitarian projects in the world emerge with fury because they hatch the desire to extinguish all diversity – the diversity of life, the diversity of culture, the diversity of seeds, the diversity of territory.’» (Source: https://fridaysforfutureitalia.it).

In 2007, the UN took a step forward and clarified its value guidelines by adopting the United Nations Declaration on the Rights of Indigenous Peoples, which enumerates a series of rights including:

– the right to self-determination and cultural development (Art. 3);

– the right to practise and revitalise cultural traditions and customs (Art. 11);

– the right to maintain and develop contacts, relations and cooperation, including activities for spiritual, cultural, political, economic and social purposes, with its members and with other peoples across borders (Art. 36).

Today, Pope Francis and the young people of Fridays for Future show us the preliminary way based on responsibility, reconciliation and recognition, values that run through the Charism and Mission of our Congregation, as specified in the Positions and Declaration of Chapter 31.

LET US MOVE FORWARD WITH HUMILITY AND CONFIDENCE!