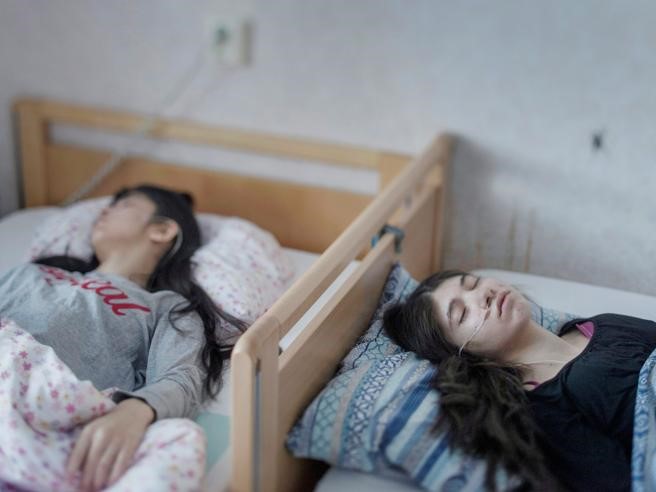 IT’S NOT A VIRUS, IT’S NOT A GENETIC PROBLEM.
IT IS A REACTION TO PAIN, TO FEAR.

A heartbreaking phenomenon that has been recorded in Sweden for some years has gone almost unnoticed: the youngest migrants, victims of trauma and witnesses of violence, suffer from what they have called resignation syndrome.

It exclusively concerns boys and girls who arrived in Sweden from the republics of the former USSR, from the Balkan countries and, more recently, children of Yazidi origin. A few cases have emerged in Australia, again among immigrant children.

It has affected hundreds of children between the ages of eight and fifteen who fall into a state of first abulia and then lethargy, catatonia. And they sleep, they sleep for months or years.

«The first report, in a scientific journal, came out in 2005. “They remain passive, immobile, mute, unable to sleep and drink, they are incontinent. They have no reaction to physical pain. A Swedish neurologist, Karl Sallin, speaks of cultural psychogenesis: the pathology is triggered when the child internalises the dominant rules of the culture in which he lives. Fled from their homeland, not welcomed in the country of arrival. They cannot go back or move forward. They call it resignation syndrome, but it sounds more like disapproval. There is something divine in the sleep of refugee children: a gaze that needs no eyes to see. They know that words are of no use. They speak to us in silence. They judge us». (Concita De Gregorio)

These hibernating children “know that words are of no use. They speak to us in silence. They judge us” …

To awaken them to a worthy life,
it is up to us to put into circulation an internal coherence
between words, meaning and actions
to break through the petrified consciousness of our humanity.

FROM RESIGNATION TO HOPE IN LIFE, HOWEVER

I was sure of it.
I would have drowned.
Too high the waves
Too small the ship
Too far the coast
too frightened the mind.
There was a smell of the end
and the relief was alienating.
Finally to stop struggling
of despairing
of suffering.
But something inside
was struggling in agony
and could not die.
It was hope.
Hope is
is a pain that does not give up.