Our History Began in the 17th Century

It began in the 17th century with Saint John Eudes (1601-1680) an exceptional priest for the role that he played in the spiritual renewal of the French Church, as a “missionary of divine mercy”, a workman of the new evangelization in his century. 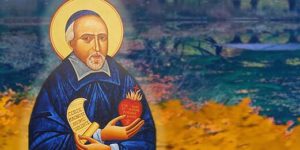 His activities as a preacher bring him into contact with a multitude of people in the cities and even more in the countryside. He thus understands how the population was exasperated by the burden of taxes, military brutality and malnutrition. He is touched by moral miseries, material poverty, the suffering of the victims of injustice and of the sick left to themselves. The Saint thinks that the poor certainly need consolation but also brave protectors. People heard him condemn “the eaters of peoples, the leeches with their superb houses”.

“The goods and the money that are in your possession—he says to the rich—are not yours but God’s”.

In the “century of security rooms”, all those who challenged the established order, be it religious, political, moral or family-related, were marginalized and destined to imprisonment. Prostitution was considered a social plague and the greatest sin of that time.

“Ladies had become a toy for the whole society. They were imprisoned too if they were not in good relations with the authorities and the military”.

In 1641, Saint John Eudes, in Caen, Normandy, laid the first foundations of the Order of Our Lady of Charity, opening a Refuge House for women who were socially marginalized, ill-treated or involved in prostitution and already temporarily hosted by caring families or friends.

Among these, the young Madeleine Lamy incites Saint John Eudes to gather in a single structure the girls who asked to repent, reproaching him with these words:

“Where are you off to now? To some church, I suppose, where you’ll gaze at the images and think yourself pious. And all the time what is really wanted of you is a decent house for these poor creatures who are lost out of lack of guidance and resources”.

The collaborators of that time zealously translated the key intuition of the life of St John Eudes:

“I do not want anything at all, but if God commanded me to want, I would choose to live always to help save souls.”

The first small Refuge, a modest rented house, opened on 25th November 1641, thanks to the willingness of Marguerite Morin, a pious secular woman, who took charge of it together with other collaborators including the young Marie-Madeleine Herson, granddaughter of St John Eudes, who was only 15 years old. St John Eudes considered it as “a hospital in order to receive sick souls and help them regain their spiritual health”. This also answered to a concern of the time that the Saint had already shared since 1634 with various associations and personalities of the Catholic, religious and lay world, all committed to the renewal of the spiritual and social life of their time.

In 1644, when Marguerite Morin leaves the work of St John Eudes, he turns to the Visitation Sisters. Mother Patin arrives with two sisters, but it would take several years for the new community to take shape.

Papal approval arrived in 1666, and in the following 150 years other sects were to be born in Normandy and Brittany, as a result of laborious consultations between religious and civil authorities. During the Revolution of 1789 all the Religious were dispersed and the Houses closed, but fifteen years later most of the communities reopened, including that of Tours: here in 1825 a young superior, the later Saint Euphrasia, would found, with audacity and foresight, the St Magdalene Sisters.
Inside the monastery of the Refuge a Carmel was born in which some young women who had been welcomed, having followed a path of conversion, found favourable conditions to fulfil their desire for a contemplative life, as a living sign of God’s creative and saving tenderness.