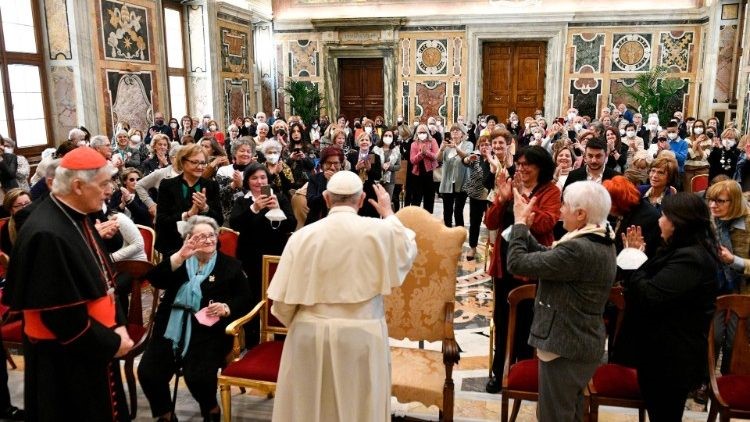 This is how the Pope returned – verbatim – to the war in Ukraine during his audience with the CIF (Italian Women’s Centre) last week, reaffirming that a world that is now globalised needs a different approach to international relations:

“I was ashamed when I read that I don’t know, a group of states have compromised to spend two per cent, I think, or two per thousand of their GDP on arms purchases, as a response to what is [happening] now … the madness, eh? The real answer, as I said, is not more weapons, more sanctions, more politico-military alliances, but a different approach, a different way of governing the world, not showing teeth, like now, right?”

“Dear friends, it is now clear that good politics cannot come from the culture of power understood as domination and overpowering, but only from a culture of care, care of the person and his dignity and care of our common home.“

With our hearts broken by what is happening in Ukraine,
we do not forget the wars in other parts of the world, such as Yemen, Syria, Ethiopia…
I repeat: put down your weapons! God is with peacemakers, not with those who use violence…
Immagine: avvenire.it

At the end of the audience, Pope Francis reiterated his conviction that women “can change the system, if they manage to ‘convert’ power from the logic of domination to that of service, of care”.

“Like other historical Catholic associations, yours has changed with the changing of Italian society. That is why it is also good to “lighten up” on structures that have become unsustainable, in order to devote itself better to training and cultural and social animation.”

IT IS GOOD TO SEE HOW WE ARE IN TUNE WITH THE POSITIONS OF THE CONGREGATION AND OUR PATH OF RADICAL TRANSFORMATION SUMMARISED IN THE DECLARATION OF THE 31ST GENERAL CHAPTER.