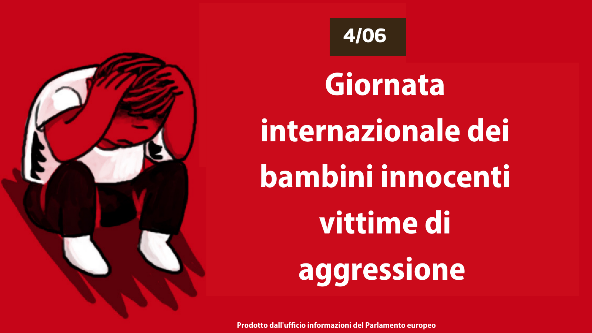 Urgent need to recover the trust of children!

The aim of the day is to raise awareness and acknowledge the pain that afflicts children around the world who are victims of physical, mental and emotional abuse. Established in 1982 by the UN ‘shocked by the large number of innocent Palestinian and Lebanese children who are victims of acts of violence perpetrated by Israel’, in situations of war or armed conflict.

A few years later, in 1989, the United Nations General Assembly adopted the Convention on the Rights of the Child, the human rights treaty with the highest number of signatory states (196) that defined for the first time the fundamental rights to be guaranteed to all children in the world. Nevertheless, today – the news confirms this – violence against children is a global phenomenon that manifests itself in various forms and in contexts, not only of war.

The 2030 Agenda for Sustainable Development approved in 2015 provides a universal plan for achieving the Sustainable Development Goals (SDGs) to ensure a better future for new generations. Achieving the Agenda’s goals would ensure the reduction of conflict and poverty, access to water and food, education and, in general, the creation of a safer world for children around the world.

TO GIVE THE WORLD A FUTURE WE ADULTS
MUST RECOVER THE TRUST OF CHILDREN…
BY INVESTING THEM WITH TRUST…
NOT ABUSING THEIR TRUST ….

There is an urgent need for greater commitment and awareness-raising for the promotion of international humanitarian law, respect for human rights and children’s rights.

Violations of children’s rights to be prosecuted!

“Numerous psychological studies have shown that a child who has been invested with trust in the first years of life will in turn be ready to invest trust in his peers, in institutions and above all in himself. On the contrary, the absence of trust will produce not only and not simply distrust, but distressed orientations, ill strategies and bad community orientations.”